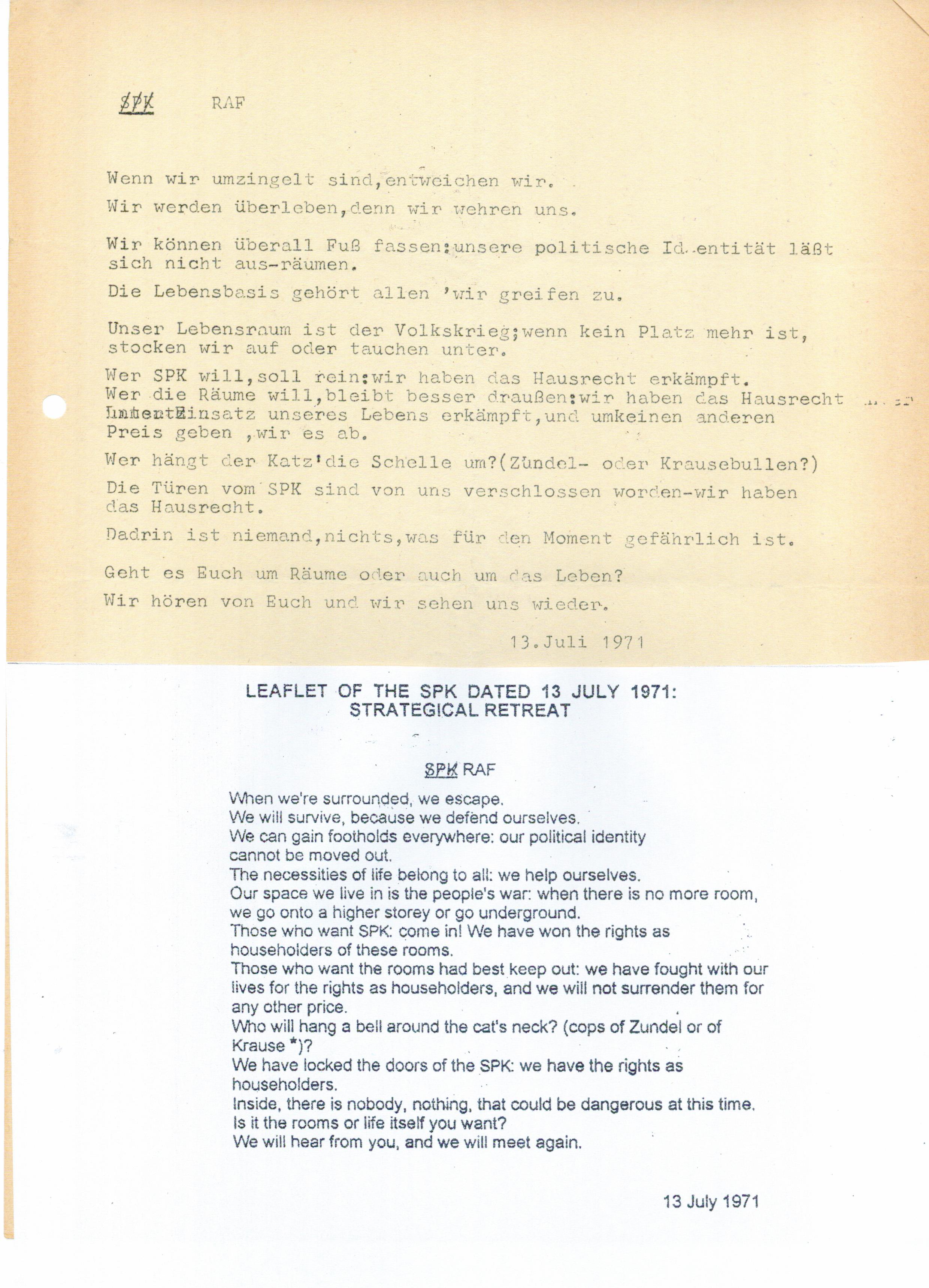 * Zundel = mayor of Heidelberg, chief of the local police;
Krause = minister of the police of the federal state of Baden-Wuerttemberg

Concerning this leaflet of 13 July 1971 the author asked SPK/PF(H):

What was the intent of the title

? It seems to imply the SPK had been replaced by the RAF. Was this statement posted at Rohrbacherstraße 12 in addition to distributing it to local media?

As to the "last" leaflet now.

You are right, it deals with replacement, to be precise: about re-place-ment. There is announced the loss of the place for the SPK in the world, existing until then, and there are mentioned at least three places for choice, destined to regain a place for the SPK in the world. RAF places? Never: not unlike the psychiatry patient from the "first" leaflet they themselves (the RAF) had contacted the SPK because they had lost their places.

The "last" leaflet here in question deals with "aufstocken" (means: to go onto another level, to build another storey onto), combined to continuing patients‘ people warfare ("Volkskrieg"). Both terms point clearly enough to a real place

*, known to all who frequented the SPK: the topmost storey (floor) in the house Rohrbacherstr. 12, not in use, paid for by the university, neither prohibited nor allowed to the SPK, quite in difference to the SPK rooms in the lowest storey, closed on 13 July 1971 by ourselves (strategical retreat).

the only one real place mentioned in the leaflet; the others clearly distinguished from that as purely metaphorical "places".

Thus a place for re-placement of the SPK-rooms threatened by danger, now lost, a place which could have absolutely nothing to do with the RAF, fond of nothing else but hidden places, except prisons and hospitals, they – quite different from us – feared like the little child the cellar. Also this leaflet is to be seen as a palimpsest. In this case as the palimpsest of a strategical plan in patients‘ people warfare which aimed at other, because at the moment of occupation uncontested rooms. The occupation of these rooms on the topmost storey

** thus the only action to prefer, because ripened by the situation itself.

It was not without reason that the three letters were crossed through in this unusual way:
SPK – the three slashes pointing upwards.

For these rooms Minister Hahn had all the years spent a lot of money of the population who had been kept in unawareness about this fact until then, of course, but all the more subjected to his propaganda in the media that the SPK and especially Huber with their not paying for the SPK-rooms were the exploiters of the poor population. Hahn thus falsely distributing the money of the poor population, thus Hahn the secret Communist, as there exists Communism in the brains not only of children widely – – . At any rate a fine contradiction demanding activity and from this should have resulted more fine leaflets about that.

This plan originated from the fact, that till the events of Wiesenbach on 24 June 1971 more and more people, disregarding the prohibition by the former SDS, had joined the SPK, but from 24 June 1971 on they did not dare to come again. Among them also and especially those, like e.g. Lutz Taufer&Co from IZRU (compare Stockholm), who later on twaddled, gossiped and lied the more to the media, interpreting also the leaflet in question in the way, which seemed most suitable to what the media expected to learn.

This leaflet was neither destined for nor distributed to the media. There existed only as many copies as Huber could take in the left inner pocket of his jacket, when he, after 13.7.1971, stood alone before the main entrance to the house of Rohrbacherstr. 12 from the early morning to the night, ready for information to everybody who happened to ask him, but giving a leaflet only to SPK patients, so that they take it back home, discuss it and come again, latest on the following Friday evening, then ready for the planned replacement. Before shutting finally the door to the SPK rooms in the lowest storey of Rohrbacherstr.12 on 13.7.1971 we had also pinned one copy of this leaflet at the inner pane of the door to the SPK rooms in the lowest storey.

Only an old policeman, called by phone by the housekeeper as it seemed, had come in the following morning, failed to read or to understand it and then, shaking his head and therefore unaware of Huber, left the house, crossing the street to the police headquarter, and nothing else had happened.

The decision to take down the named palimpsest leaflet in its final form had been taken by those some dozen SPK patients who continuously frequented Rohrbacherstr. 12 also in the last weeks.

On Friday evening there came some fourty patients more. Remaining in the street in front of the entrance, they proved that all had understood the plan, because they voted for a delay of the planned occupation to a date to become fixed during the following weeks. At that moment those who had taken down the leaflet declared the SPK to be finished now and the rooms in the lowest storey to become opened again, but serving as IZRU from that moment on.

On 20 to 21 July 1971, the following week, those meanwhile empty rooms were taken back by the police. Therefore Huber, then in prison, put pressure on his barrister, Eberhard Becker, either to get him rooms for the IZRU in the university or to vanish and to never come back as his barrister and lawyer. Becker had been until its prohibition not only a member of the SDS but also one of its last presidents on the level of the FRG Western Germany (Bundesvorstand), and still the AStA (Students‘ Parliament) of the university had to do and did what the former, now forbidden SDS commanded. And so it was that the by the former SDS forbidden, now former SPK occupied now uncontested other rooms in another part of the university, be it only IZRU rooms.

Now you know also what kind of relations there were. There was a saying in old Rome that booklets have its fate (habent sua fata libelli). Leaflets of the SPK need only one page to replace fate, fatalisms and fatalities which, if taken down in all details, could fill some volumes of bible extent. Oh species, stop fate and continue history, be it by help of theo-ry.

See also: SPK Indeed - What the SPK really did and said